Sawmillers Reserve is the site of a former sawmill operated by the John W. Eaton Ltd timber merchants. The saw mill moved to this site after initially setting up near the present day North Sydney railway station in 1880.

The heyday of the timber yard was between the 1890s and 1920s. Eaton’s had its own power house, two sawmills, engineers shop, joinery shop, a blacksmiths shop and its own wharf and crane to unload logs/load timber from smaller vessels. After World War I a combination of factors including increasing road transport, increasing land values and the loss of the local working population led to a decline in business, and the site was vacated entirely in the early 1980s.

As a result of resident action led by Carole Baker, Mayor of North Sydney the vacated land was saved for a public reserve. Modernist Landscape Architect Harry Howard, working in association with Barbara Buchanan, prepared a landscape design for Sawmillers Reserve based on Sydney School principles of integration with the natural landscape.

The Reserve has sloping embankments planted with native vegetation and open grassy foreshores suitable for picnics and open play. It provides expansive views south to Pyrmont and west to Balls Head. The Reserve contains the remains of constructions from the timber yard and on the foreshore is the skeleton of a Maritime Services Barge. 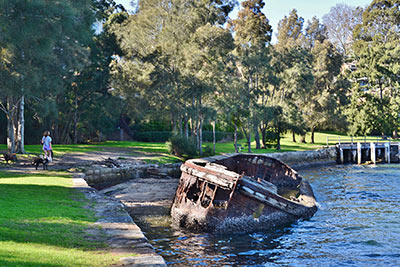 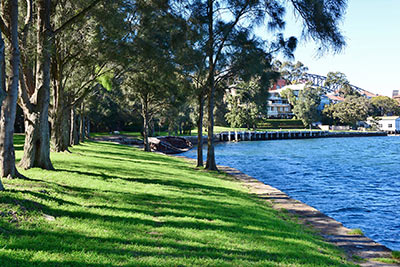