The location of Luna Park was formerly occupied by a series of workshops, cranes, and railway sidings used to provide for the construction of the Sydney Harbour Bridge. When the Harbour Bridge was completed in 1932, North Sydney Council opened applications for tenders to develop the site.

The park was constructed at the foot of the Sydney Harbour Bridge during 1935, and ran for nine-month seasons until 1972, when it was opened year-round. Luna Park was closed in mid-1979, immediately following the Ghost Train fire, that killed six children and one adult. Most of the park was demolished, and a new amusement park was constructed; but was closed again in 1988 as an independent engineering inspection determined that several rides needed urgent repair. The owners failed to repair and reopen the park before a New South Wales government deadline, and ownership was passed to a new body. Luna Park reopened in 2004 and has continued operating since.

Luna Park is one of two amusement parks in the world that are protected by government legislation; several of the buildings on the site are also listed on the Register of the National Estate and the NSW State Heritage Register. The park has been utilised as a filming location for several movies and television shows. 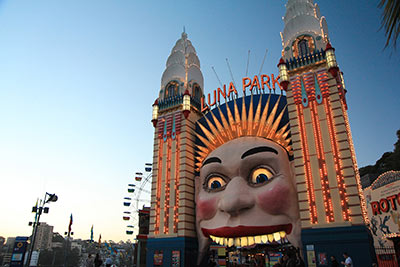 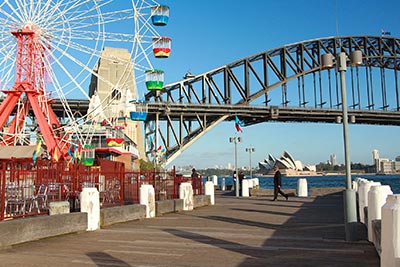